By the end of the first part, Damian McGinty and Mairead Carlin sang together the song “Let the River Run” in a very great performance!

They were accompanied by a chorus and four youngters 🙂

Do you want to watch it?

NEW VID: DAMIAN McGINTY SINGING “THIS IS YOUR SONG”

Hi, everyone! New video has arrived!

Yeah! The concert “Sons and Daughters” was a huge opening event for the “City of Culture 2013” in a very, very crowded theatre “The Venue” in Derry.

Dana introduced Damian…and the public gave him a big ovation!

He sang “This is your Song”

An interview for the City of Culture 2013 event.

After finishing his performance on the “Tranquility Cruise”, Damian McGinty went to his hometown Derry in Northern Ireland , directly to the stage!

Yeah! Because he had a rehearsal for the  opening concert of “City of Culture 2013” the  awaited and very important concert called “Sons and Daughters” .

The idea was to put together the most well-known performers around the world that were Derry natives.

Of course, Damian McGinty had to be there, because he has put in the head of millions of persons the name of Derry since he became in a Glee-star!

Not only that…Remember he’s singing since the age of 6 and entered to “Celtic Thunder” when he was 14…At 18 he win “The Glee Project” to be in “Glee” 7 episodes but he got much  more!

Now he’s an amazing singer and a bussinessman because he’s the owner of a record studio (AudioBooth) and a record label (WalledCityRecords).

So…Do you want to see the pics?

Well, such as all of you could imagine , the concert is sold out!

The event will be on TV by BBC.RedButton (only in UK)

By Radio will be on air  ON LIVE at 7.30 pm by Radio Foyle and Radio Ulster

BBC Northern Ireland television will record the event to broadcast on Jan. 26 at 10.30 pm 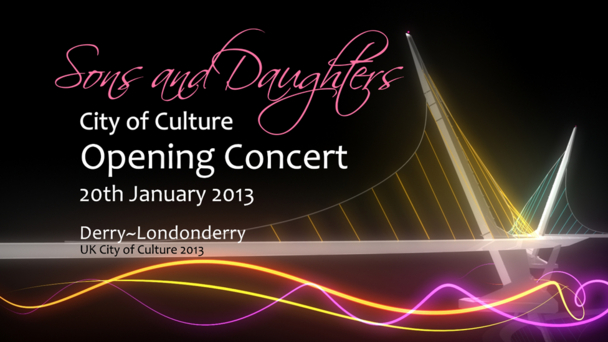 DAMIAN McGINTY ON BOARD! TRANQUILITY CRUISE

After being in his hometown Derry during the Holidays,  Damian packed again all his suitcases…in order to return to America.

He’s going to Florida to board a Cruise!

Not only that,  Damian will meet with some other “Celtic Thunder” alum, Paul Byrom 🙂

The “Tranquility Cruise” is a show arranged on the MS “Doorman”, it departures on January 7  from Fort Lauderdale (Florida) and returns on January 18 to the same port, it’ll visit the Southern Caribbean for 11 days!

WELCOME TO DERRY CITY OF CULTURE 2013!

There were awesome fireworks on the Peace Bridge!