Celtic Thunder is on Australia!

They are making promotion before starting with the concerts….This is a song performed by Damian McGinty, Neil Byrne, Ryan Kelly and Emmet Cahill in “The Morning Show” – Sidney.

Great to know that the television special “Legacy” will be aired in PBS in 2016 and among the soloists will be Damian McGinty, who is reunited with the lads in this amazing special!

So take a look and enjoy!

This is an amazing vid from King 5 News!

Damian McGinty and Ethan Bortnick were invited on June 25 to perform and chat!

The video begins with Damo singing “Home” one of his most emblematic songs.

Then they sat down to chat with the host Margaret Larson.

Yeah! Our beloved Damian McGinty will be promoting the “The Power Of Music” that was shooted few months ago.

During the airing of the video Damian will be chatting, in person, on KCPT (Kansas City PBS) TONIGHT!

We will have @damianmcginty of @CelticThunder in the studio Saturday night!

Tonight @damianmcginty will be in the studios for our final Spring Funding Live Night! Starting at 7pm.

Damian McGinty is promoting the PBS special “The Power of Music” and now he’s heading to Lincoln, Nebraska because on March 5, he’s going to present it on NET PBS  at 7 pm.

If you think that is so early, don’t worry, it’ll be repeated at 11 pm, then on March 6 at 8.30 pm and March 8  at 7.30 am
The Nebraska Educational Telecommunications has published the following:

If there’s a God, my plane will take off today. Lincoln, Nebraska…Hope I see you s

In Atlanta Georgia. Flying soon To Omaha. I’d be lying if I said I know where that is. 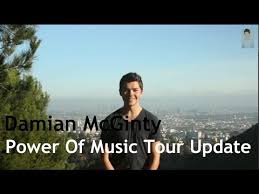 Our beloved Damian Mc Ginty will be chatting on live in Blue Ridge PBS station (VA) this Sunday March 2 at 7 pm!

Yeah! He’ll be there  during the airing of “The Power of Music” concert that was filmed with the amazing Ethan Bortnick.

Remember that they both will be on Tour since March 30 to ending June all around the United States performing this marvelous show!

But, not only that…!

On March 2nd at 7 pm. Blue Ridge PBS station  will opened the “pledge line” for concert tickets because these incredibles lads will perform a concert in Roanoke, VA on October 21, in this concert Damo will have a “solo”  part and that’s why they have invited Damian to the set for encourage people to buy the tickets …

What do you think…Will it be so difficult to sell those tickets? In my opinion, in less than an hour the concert will be sold out!

Three days ago, Paul Byrom has uploaded to Youtube one of songs that he made on his performance during the recording of his PBS special concert. In this video you will see Damian McGinty singing along with Paul, the very funny “Me and My Shadow” song.